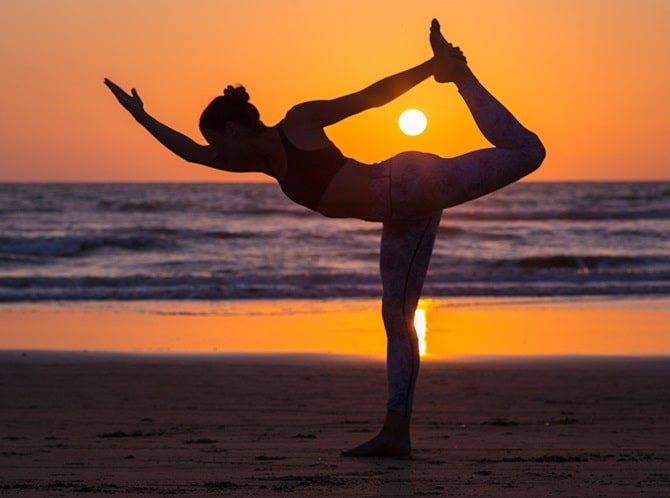 Yoga is a way of life that is used to treat both the mind and the body. If you are a beginner who is looking forward to starting with her yoga workout session, the Sun Salutation pose, otherwise known as the Surya Namaskar will serve as the opener. It is one of the basic postures that can stretch your muscles and warm you up for the rest of the session. Not only this, but the Sun salutation is the symbol for expressing your gratitude towards the sun before starting the workout. Practicing the Surya Namaskar steps early in the morning can be refreshing and yield the best results.

Pranamasana or The Prayer Pose

Stand straight on the yoga mat, keeping your feet together. Your entire body weight should be well balanced by both the feet. Take a deep breath to expand your chest. Make sure that the shoulder muscles are relaxed. While inhaling, slowly raise your arms and join them together in prayer pose as you begin to exhale. You can also join your hands in the same prayer pose by extending the arms backwards. Although, that requires a high level of proficiency as well as attained flexibility. This is the first step that marks the beginning of the 12 steps for Surya Namaskar.

Of all the Surya Namaskar positions, this one is the most efficient to stretch all of your muscles, from head to toe and reduce any possible chances of injury while working out. In this step, you have to breathe in slowly while lifting the arms up and back. Make sure you don’t widen them and keep the biceps close to your ears. This is the best way to stretch all the muscles in the body while breathing correctly.

Stand tall with back straight and exhale slowly. Now, maintaining the erect position of your spine, try to bend forward as much as possible. The goal is to bring the hands down on the floor, beside your feet. However, it must be mentioned that for a first-timer, there can be some difficulty in keeping your legs straight. Therefore, you can bend the knees in the beginning while making a constant effort to keep them straight. This will help you to perfect the process with every single practice.

Ashwa Sanchalanasana or The Equestrian Pose

Lie down on your face on the yoga mat, keeping your hands on each side. While breathing in, keep one of your legs backwards and bend one of the legs forward while having your palms flat on the mat. The best way to make the most of this Surya Namaskar asana is to keep your bent leg between the arms. Other than that, you can also extend your arms upward in prayer pose while breathing in and out slowly. It is a modified version of lunges.

Chaturanga Dandasana or The Stick Pose

Also known as the plank pose, the Chaturanga Dandasana pose involves you stretching the other leg backward (ref. to the previous posture) and making a straight line with your body. Try to keep your body parallel to the ground by supporting the body weight on both palms and toes.

In other words, it is a form of salutation using eight parts or points. While exhaling, bring your knees down on the ground from the previous plank position. After that, with your hips bent backwards, raise your posterior (towards the ceiling), put your chest and chin on the floor. The chest, chin, two hands, two knees and two feet make all of the eight points to perform this Surya Namaskar pose.

Bhujangasana or The Cobra Pose

Keeping your entire lower body portion on the ground, raise the chest and head to form this posture. Bend your elbows and hold your head high. Maintaining this position, breathe in and breathe out slowly.

Lift your hips up high and exhale slowly. With your palms on the ground and head between the arms, try to support the entire body weight on the heels.

This posture is strikingly similar to the Equestrian pose. Keep one of your legs behind, stretched out while bend the other one, bringing it forward. Keep your front foot between the arms. To make the most of this posture, try to push your hips downward constantly.

From the previous position, slowly bring one of your feet forward while inhaling. After that, touch the ground with your palms and keep your back straight. Refer to step 3.

Raise your arms up and back and stretch your body while breathing in and out slowly. You can also join them in prayer position after extending the arms upwards. Try to bend backward and push the hips outwards as you maintain this position.

Tadasana or The Mountain Pose

This is the last of all the Surya Namaskar poses. Return to status quo and exhale slowly. Join your hands in prayer pose once again to salute the sun. Inhale slowly while standing straight and relax all of your muscles.

The detailed description of Surya Namaskar step by step will tell you how to offer your prayer to the source of energy for all lives, the sun, perfectly. Note that the Surya Namaskar steps follow the pattern of stretching every muscle in your body and gradually returning to the relaxing original stage. Among all the yoga asanas, this is one of the most elaborative and significant ones because it has a lot of positive impacts on your body and mind.

Check out some of the benefits of Surya Namaskar steps

Get rid of those extra pounds

Yoga is an excellent mechanism to lose weight and get back in shape. You can go through some of the basic poses of yoga for weight loss, to plan a workout routine at home. The 12 Surya Namaskar steps regulate the cardiovascular system. As a result of all the stretching, you start to sweat and lose the excess fat. Get toned abs and arms by performing the Surya Namaskar steps regularly. Not to mention, it also improves your flexibility and posture.

Ever thought that a yoga asana could benefit your skin in any way? Well, it is true! Due to the fact that it enhances the blood circulation process, the skin looks young and radiant. Most importantly, yoga makes you sweat which means all the toxins leave your body that makes your skin glow. Other than that, it also helps to prevent wrinkles so that your skin retains its firmness.

Do away with stress and anxiety

The Surya Namaskar steps have a great impact on the nervous system. Growing stress and anxiety is not reflected positively on physical health after a certain time. Surya Namaskar will help you to relax the body and mind efficiently through all the twelve steps. As a result of this, you will also be able to get a good night’s sleep regularly.

It is another one of the notable Surya Namaskar benefits that can help you stay healthy in the long run. The 12 Surya Namaskar steps bring about a positive change in the capacity of your lungs, thereby increasing your breathing stamina by stimulating the oxygen supply.

The fluctuation of hormones within a woman’s body has a lot of effect on her mental and physical well-being. However, yoga helps to regulate the hormonal levels and build a healthy mechanism. Last but not least, the Surya Namaskar steps also help women who are dealing with irregular menstrual cycles.  For women, yoga is so much more than just trying to get in shape and relaxing the mind. It is more of a lifestyle that can help us get through the difficult phases while maintaining our composure.