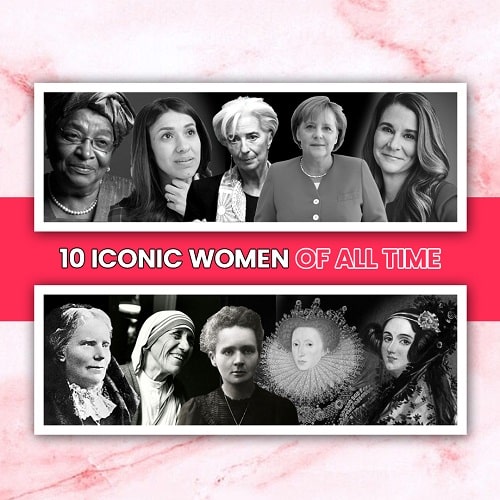 The beginning of the human race is ambiguous. We assume it was Adam and Eve that created the world. Although Adam performed an essential job, it was Eve who bore the pain for nine long months & started life. Thus, since earlier days, women have been efficiently playing iconic characters of an honest girl, a sweet sister, a right life partner, a loving mother and a valuable professional. They are ruling everywhere ranging from IT, Technology, Science and Analysis, and Teaching, to Arts, Literature, Business, and Defence. Several women have awakened humanity for decades in iconic roles, namely Rani Laxmi bai, Mother Teresa, Annie Besant, J.K.Rowling, Shirin Ebadi, Kalpana Chawla, and many more iconic personalities.

Thus, throughout history, we have witnessed many iconic and inspirational women figures setting an example to fight for women’s rights and gender equality. They have astonished the world with their talent and have set a brilliant example to be a perfect role model for everyone.

An article or two is not enough to understand how the world has been impacted by women. We shall try to discuss a few of them who had a tremendous contribution to build the society and spread happiness all over the world.

Ten Iconic Women of All Time

Born on 17 July 1954, Angela Dorothea Merkel has been the chancellor of Germany since 2005. She has served as the leader of the Christian Democratic Union (CDU) from 2000 to 2018. Merkel has been broadly portrayed as the real head of the European Union, the most influential lady on the planet, and by certain analysts as the “icon of the free world”.

Being the iconic personality of Europe, Angela is leading the vastest economy of the region through a financial crisis to bring it back to growth. You can witness her leadership through her steely reserve, from taking a stand against Donald Trump to helping more than a million refugees from Syria to migrate into Germany. Forbes listed her as the number one powerful and amongst the best iconic women.

Born on 1 January 1956, Christine Lagarde is a French government official as well as a legal counsellor. In fact, since November 2019 she is serving as President of the European Central Bank. Besides, she worked as an MD of the International Monetary Fund (IMF) from July 2011 to November 2019.

In here career lifetime, she served in diverse senior leadership posts in the Government of France:

Moreover, Lagarde was the first iconic lady who reserved the position of finance minister of a G8 economy. What’s more? She was also the first lady to head both the ECB and IMF. She ranked the best finance minister in the Eurozone on 16 November 2009 by Financial Times.

Accord reappointed Christine for a second five-year term, beginning 5 July 2016. In 2019, Forbes positioned her as number two on its World’s 100 Most Powerful and iconic Women list.

Elizabeth used to give herself the title of ‘The Virgin Queen.’ It’s because she decided to marry her nation rather than a person to dedicatedly serve its homeland. No doubt, Queen Elizabeth I is the most iconic ruler in the history of the British. Under her guidance, the European country became a major European force in governmental problems, trade, and expressions of human expertise.

Queen Elizabeth had a rough journey to the position of authority and in reality, has never been allowed to rule, each in light of the fact that she was a woman and because her mother was Anne Boleyn, the much-despised ex of the King of England.

Soon though ‘The Virgin Queen’ proved all the haters wrong to become famous as one of the most significant women pioneers. All because of her intellect, hot temper, and smartness Queen Elizabeth indeed deserves this rank.

Dr. Elizabeth Blackwell was the first iconic lady to get a clinical degree from an American clinical school. She was inducted to an all-male foundation and financing clinical school. In 1856, Elizabeth collaborated with Dr. Marie Zakrzewska and her sister Emily to launch the New York Infirmary for Women and Children.

They additionally opened a clinical school in 1857, which opened doors for ladies’ specialists by preparing them for life, and it was the first experience, just as particular clinical consideration for those living in poverty.

Iraqi Yazidi lobbyist Nadia Murad is a prominent voice in the battle to support ladies and youngsters influenced by war. In 2014, Islamic State kidnapped her and held her hostage for a quarter of a year. During that time, they kept her as a slave and she even experienced sexual and physical brutality there.

After her release, she turned into the first individual to talk on human dealing with the United Nations Security Council. She is additionally the organizer of Nadia’s Initiative, which helps those influenced by decimation and human dealing. In 2018, she was granted the Nobel Peace Prize, with Denis Mukwege, for their work “to end sexual viciousness as a weapon of war and equipped clash.” She is the first Iraqi as well as Yazidi to win a Nobel Prize.

Mary Teresa Bojaxhiu is also called “Mother Teresa of Calcutta”. Born on August 26th, 1910 at the then Yugoslavia (presently the Republic of Macedonia), she arrived in India in the year 1929 and soon acquired Indian citizenship.

Being Roman Catholic she settled in Calcutta to dedicate her life to God among the least fortunate of poor people. In 1950, she supported the forlorn, poverty-stricken, incapacitated, evacuees, sick, and outcasts by setting up the Missionaries of Charity. Today, the Missionary is available in more than 100 nations.

In 1962, Mother Teresa acquired the “Padma-Shri” title. Further, in 1979, she got the Nobel Peace Prize, which she, of course, was worthy of. Afterward, in 1980, she got the title of “Bharat-Ratna”, the highest citizen grant in India. She embraced a basic living style and committed her life in the service of humankind.

Melinda Ann Gates, born on August 15, 1964, is an American humanitarian and previously the head supervisor at Microsoft. In 2000, she helped to establish the Bill and Melinda Gates Foundation with her husband, Bill Gates, the world’s most significant private altruistic association as of 2015. Mrs. Gates reliably gained the position as one of the world’s most influential iconic women by Forbes.

Ellen Johnson-Sirleaf became the president of Liberia in January 2006. She was the first chosen lady head of state in Africa. She passed the Freedom of Information Bill (the first of its sort in West Africa). To examine violations during Liberia’s war, she built up a Truth and Reconciliation Commission.

All the above turned her into a worldwide icon strengthening women. She got the 2011 Nobel Peace Prize award for her role in advancing harmony, vote based system and sex equity.

These are just a few examples. You will find the greatness of women at every end of the world in every house. Every woman is iconic in her way. We can’t imagine a single-family without a woman. Women convert a house into a home. Every woman is inspiring and has made this world a better place to live. We worship women as a Goddess and idol of empowerment. Women are integral and foremost part of the world—we as an individual salute to every woman out there.

Kudos to all these iconic women!